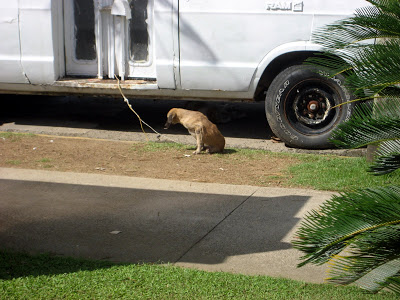 Every once in a while, even a dog walker finds the time to enjoy a vacation. And that’s exactly what I did over Thanksgiving week! I packed my bags and headed down to the Caribbean with my family.

It’s easy to say that the lifestyle on the islands that we visited are very different than the lifestyle in North Andover, MA! And that’s not just for us two-legged inhabitants, life for dogs in the Caribbean can be a little less glamorous than our spoiled pups. I saw plenty of stray dogs laying along the streets, as well as dogs with collars walking around without a leash, or tied to a car. Most females looked as if they had a number of litters of puppies…apparently spaying and neutering dogs in the Caribbean wasn’t the trend!

However, there was something different about the stray dogs compared to the dogs that I walk back at home…and I’m not just talking about the fact that they didn’t have a warm roof over their heads. These dogs were well behaved!

Ok, before I go further, I’m not saying that the dogs that I walked are BADLY behaved. But, even my two girls will jump onto a guest or beg at the kitchen table once in a while. And plenty of dogs pull on the leash. It happens!

But while in the Dominican Republic, I watched a young dog, tied to a truck, lay patiently for his owner. No crying, no pulling, no barking. Just laying patiently. If Reese were tied to that truck, boy would she make a fuss! So why doesn’t this dog do the same, as his owner sat nearby at a booth selling jewelry and tourists walked back and forth?

The blame goes to us. This dog has been conditioned. His owner doesn’t spoil him and see him as a family member like we do our pups. So when the dog cries, or is unhappy being tied to the truck, he just doesn’t care. He doesn’t go over to comfort his dog or give him a Kong to keep him busy or take him for a walk. He ignores the pup, so the pup learns that crying does no good. He might as well just lay down and take a nap.

There was another dog that I saw at a beach in Tortola. The beach was filled with beach chairs and tourists swimming, playing, and lounging. This dog plopped herself right in the center of the beach and took in the sights. When she saw someone eating some food, she politely walked closer to the person and sat patiently. She didn’t beg directly, didn’t jump on him, didn’t try to grab the food out of his hands. And he gave her some food. 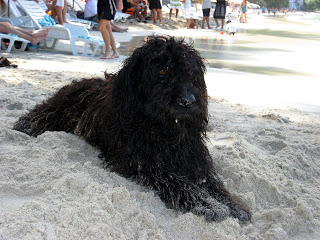 But what if the stray did try to grab his food, or jump onto the guy? He would not be happy! He’d shoo her away, and she would not get any food. Most tourists aren’t going to bother to cater to a stray dog that’s being a pest. But…if they were back at home though and their lovable little maltese was barking and jumping for a piece of a sandwich…the case may be different!

So perhaps these strays can teach us a lesson or two. They certainly seemed content with their lives, though I’m sure a haircut on the stray at the beach would do her good! And a warm home and loving family beats living on the streets. However, what they have that many of our dogs don’t have, is rules, expectations, and structure. They behave because they benefit from the behavior, and because misbehaving gets them nowhere. Our dogs misbehave because we put up with it, deal with it, and cater to it!

I guess maybe I should had brought Elsa and Reese on my trip to learn a thing or two : ) 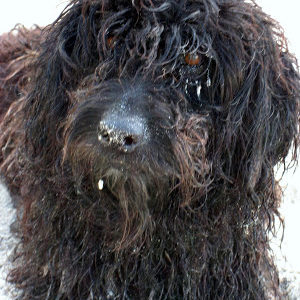