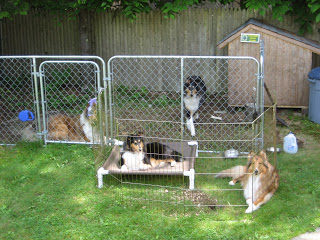 Well this weekend didn’t turn out as we had hoped. It all started off well. Early Friday morning the girls, my husband Chris, and I all got up early and headed to the Topsfield Fairgrounds for Elsa to compete for her final leg in Rally Excellent. And though it was a dreary, rainy day and Elsa missed a jump, she still managed to leave with a red ribbon and her RE title! We’ve gone further with Rally-O than I had ever imagined but it’s time to move on to obedience…classes start next Monday!

That afternoon we headed off for a weekend at my parent’s lake house on Bow Lake in NH. The girls had the chance to play with their “cousins,” my parent’s three Collies and a pug. Saturday was beautiful, we took lots of walks and both Elsa and Reese got to swim in the lake. They had a wonderful time.

However, Sunday had a gloomy, rainy start and my parents headed out early with their dogs. Chris and I decided to make the most of our weekend, he had taken Monday off, so we stayed and began a game of monopoly. After a little while I went into the kitchen to get a drink, Reese following me, when I suddenly heard her trip into the water bowl on the ground. Finding this odd, I had her follow me into the living room to see if she was alright. But she wasn’t. She began to stumble to the left, her back leg unable to hold her up and her front leg folding under her as well. Chris bent down and Reese tried to cuddle with him while trying her hardest to regain her balance and began whining. Her left side just wouldn’t support her. I sat close to her on the ground and my poor little girl fell into my lap, whining and scared. She rested for a bit as I calmed her. After resting like that for some time, she tried to get up, and with my help was able to stand and walk. Chris took her outside and she trotted around as if nothing had happened.

We believe that Reese had a partial seizure. I have an appointment with my vet on Friday this week. It was a scary event and we hope that she doesn’t have another episode in the meantime. There are many things that can cause a seizure and their prevalent in Collies, but I can only hope for my little girl that this is something that we can prevent in the future. In the meantime, she’ll be taking some time off from walking other dogs with me. But of course, that doesn’t mean she won’t be going on walks when I get home, and Elsa will stay around to keep her company during the day! I’ll continue posting updates on Reesie <3