Apparently my dogs are training each other. To misbehave.

Today I saw the proof. I watched Elsa train Reese. It sounds crazy, I know. And the worst of it was, she was training her to bark!

I’ll begin by saying, I’m not a morning person. And this morning I was exceptionally groggy. So as I put together my hubby’s lunch, I accidentally dropped a baby carrot. No big deal though, I’ve got dogs…food doesn’t last very long on the floor. Sure enough Reese grabbed the carrot and as she usually does when she finds a tasty treat, she trotted into the living room to eat it. However, while trotting past Elsa, she accidentally dropped the carrot, right in front of her sister.

A side note…Elsa’s the boss. And even if Elsa could care less if something’s near her…if it’s near her, Reese won’t take it. Whether it’s food, a Kong, or a toy. And though I’ve never seen Elsa prevent Reese from taking an object from her, apparently Elsa is scary. And you should never, ever take something from her.

So Reese was in a tough situation. She wanted that baby carrot really badly. But she was afraid to take it from Elsa. So what did she do? Well, she did what she does best. She barked! And apparently Elsa has not read my blog, because instead of ignoring Reese’s bark, she got up, walked away, and let Reese take the carrot. She totally reinforced the behavior with a reward!

Now, do I think Elsa intentionally trained Reese? Of course not. She’s not a morning person either! Being barked at is irritating, so she moved. However, that move was a positive reinforcement for Reese…a behavior followed by a reward.

So we do have to keep in mind that our dogs can absolutely learn from each other. Whether it’s intentional or not. And even we can unintentionally reinforce a behavior, just like Elsa did.

However…ultimately, I think the moral of the story is simply this. From now on I’ll just have to have my cup of coffee before I pack lunch. 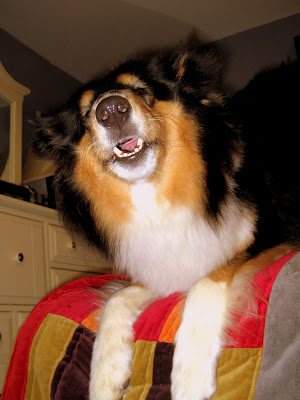