Every day I experience as a dog walker is filled with laughs, surprises, and on occasion, frustration. However, it’s not very often that I get so delighted I get a chill…on a hot summer day!

I’ve mentioned Gracie before, she’s a “retriever-mix,” I couldn’t even guess what she’s made up of. She was adopted by her “parents” as a pup and has quickly GROWN up! She’s tall, athletic, and absolutely FULL of energy. I spend most of my visits with her “playing soccer,” which is basically a fetch game with a soccer ball…the entire half hour. I stay in her fenced in yard most of the times because her “sister,” Petunia, a little pug, can’t really handle keeping up with her BIG sister. Of course, we go on the occasional walk, but we can’t go too far, Petunia’s little legs just can’t handle it!

So opportunity knocked when Gracie and Petunia’s “mom” told me that because she’s a teacher, she’ll be around during the summer. But she still wanted to give her pups the opportunity to get exercise and play with me over her vacation. So I mentioned taking Gracie for a run once a week…no Petunia…just her and I! Her mom agreed, and we’ve already enjoyed two wonderful runs.

Gracie has never been polite on the leash, so for our first run, it took a while for her to figure out what I expected. After walking a half a mile, treats in hand, Gracie got it, and we started to jog. The run began with quite the climb…up Sutton Hill Road…and boy can that girl RUN! I am an avid runner myself, but I’ve never scurried up a hill as fast as she did. We continued to test each other, she’d try to stop and sniff, I’d want to keep running. Or she’d run up ahead, and I was lagging behind. It wasn’t until we were about a mile into it, turning toward the park at the Old Center, when Gracie “got it.” And when she got it, we made a great pair! She finally settled at a loose lead by my left side, we went the same pace, we weren’t distracted. We were just a girl and a dog out for a run. That’s when the chill hit me…boy do I LOVE my job : ) 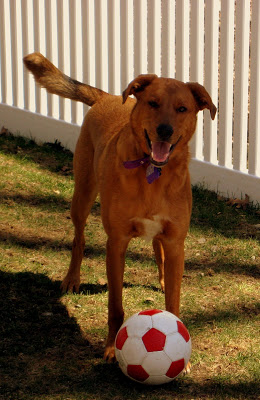