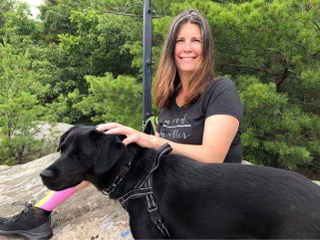 Nicole was raised during an era when all a girl needed was a fluffernutter sandwich, a few hose stops, a bike, and her dog. She and her golden retriever, Tasha, hit the streets of Melrose, MA with her older brother like it was their job. They were free to explore parks, ponds and trails as long as they were home before the streetlights came on.

Nicole earned her BA in the English Language Arts and secondary education at Salem State College. Between 1999- 2014 Nicole taught for several years while creating a beautiful family with her husband Steve. She also fell in love with Yoga. Nicole became a certified instructor and has been teaching classes and privates for the past twelve years.

Nicole brought home their first family dog, Lucy in 2010 and a year later her boy Benny. Being out in the dog world deepened her awareness of the southern overpopulation problem. In August of 2016, Nicole answered a local rescue’s Facebook plea for dog fosters. This decision changed the course of her life. For the next 5 years, she fostered countless puppies and dogs yet it was the ones who were labeled “shy” or “timid” who truly taught her about desensitizing, counterconditioning, body language, and patience. Due to her skill-set with these delicate pups, she was asked to join the foster team in a supportive role in 2018. For two years she worked under the guidance of the foster coordinator until taking over the role in June of 2020. In June of 2021, Nicole put rescue on pause to pursue a formal education at CATCH Canine Training Academy, completing the program and becoming certified in summer 2022. Simultaneously she worked part-time at a local play and train doggie daycare where she was immersed in dog handling and socialization, basic training, and dog care until she found her way to BlueDog through the CATCH’s mentorship program.

Nicole’s dogs Lucy, Benny, Poppy, Princess P, Hailey, and Angelou were and are the center of her world.  Along with her family, she has loved and lost her soul dog, Lucy Bear and Princess P, a rat terrier mix who loved and barked with unequivocal passion. Nicole made a promise to share what she has learned when they crossed the rainbow bridge. She honors this promise daily.

Beyond this, Nicole can be found on her yoga mat, chilling at a local brewery, or spending time with her bestie Brandi in Columbus, MS.