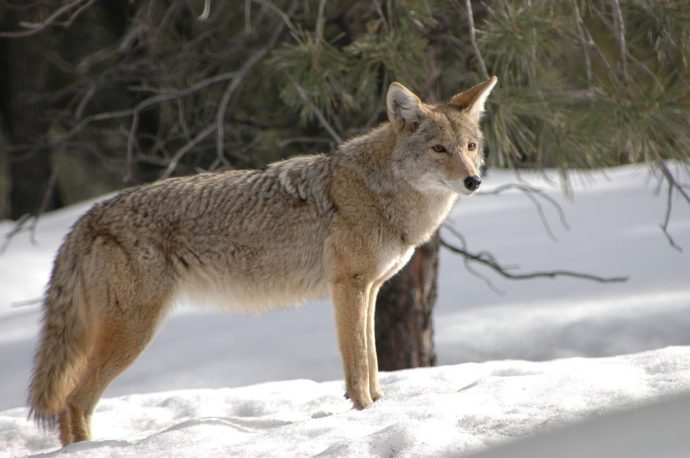 Coyotes are a common predator in New England. You may hear them at night or even spot them during the day. The problem is, there is a lot of misinformation about coyotes, their habits, and what they can or can’t do that may harm your dogs or pets.

The most important thing to know about coyotes is that it is a native canine species in North America. Coyotes exist in most states in the US, and they are roughly no bigger than a medium sized dog. They are opportunistic omnivores and are a boon to the natural order, helping birds especially to flourish. As we continually build more homes and businesses and push wildlife out of their natural habitats by bulldozing forests and fields, we will see more and more wildlife such as coyotes out in the open and trying to vye for their own survival. That being said, this is the natural habitat for coyotes, and we must learn to co-exist with them rather than eradicate them.

Coyotes are not necessarily daylight or nocturnal animals. Shy by nature, coyotes will try to do mostly anything to avoid humans. If they live close to humans, they will tend to be more nocturnal. However, it is not strange to see a coyote active in the early morning or by sunset. In areas with less human activity, coyotes will hunt during the day. Coyotes also tend to run solo or in pairs when hunting, rarely as a pack. Spotting a single coyote out in the daylight is not cause for alarm nor means that the coyote is “rabid”.

Coyotes are susceptible to rabies, however they aren’t frequent carriers of the “raccoon” strain of the virus most commonly found in, you guessed it, raccoons, bats, and skunks. Instead, coyotes may have diseases such as canine distemper, parvovirus, and mange. To avoid passing any of these diseases to your pups, make sure there’s no standing water outside where both your dog and a coyote could sip. If there is, dump out any water before your dog heads outside for the day.

It’s also important not to leave any food around that both the coyote and your dog might get to. This can also spread disease, but it can lure animals such as coyotes, raccoons, and others for a free snack. Make sure your trash bins are also secured so you’re not inviting anyone to come chow down on some tasty food waste.

Will a coyote attack my dog?

The occurrence of coyotes attacking dogs is actually remarkably low. Since coyotes are generally shy around humans, they tend to avoid areas where humans may be. Still, if you put your dog on a runner and let him or her outside to play without supervision, especially if he or she is a small dog, a coyote may find a good opportunity to strike any smaller dogs. It’s important to supervise your dog while they are outside, no matter the size of them or duration of their outside time, not just because of coyotes. Leash breakages, your dog getting tangled, weather, or even other predators like owls, hawks, or eagles can also attack your dog. Being there to help your furry friend in case any situation does arise is important.

Will coyotes lure my dog to be eaten?

There is a strange myth going around the internet right now that says coyotes will initiate chase with a dog and “lure” him or her into the woods so the rest of the pack can attack. Coyotes and dogs are so similar genetically that they could interbreed, and because of that, some dogs naturally want to “play” with a coyote. It is almost always the domesticated dog that initiates a chase and play with a coyote, not the coyote, but the coyote will take the blame. On top of this, coyotes rarely ever hunt in packs, so the idea of a coyote attempting to lure your dog away, while clever, is misinformed.

What should I do if I see a coyote?

If you see a coyote passing through your yard, let him or her be. They are likely just looking to hunt down some food for themselves or their young. If you are outside with your dog and a coyote is looking at you or your pup with hungry eyes, you can clap or yell at the coyote to ward it off (this is known as “Hazing”). You may also want to walk towards the coyote until he or she “blinks first” and leaves. Do not run away as you may initiate chase, but you can maintain eye contact with the coyote as you bring yourself and your dog to safety.

Remember, just because you see a coyote does not mean that your town has become overrun with them. Instead, it just means that they are there, and they are more helpful than they are harmful, helping to chase down rodents, rabbits, fruits, insects, berries, and lizards. Coyotes can also reduce the population of raccoons, foxes, skunks, and feral cats.

For more information about coyotes, check out this post from Project Coyote talking about dogs, humans, and coyotes co-existing.