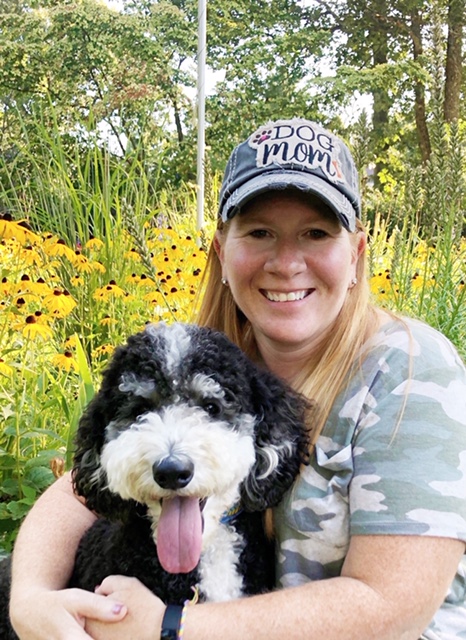 Tracy has had and been around dogs her entire life. She has had cats, dogs, hamsters, rabbits and ducks as a child. When she first met her husband, he called her Dr. Doolittle! After she got married, she finally got her chocolate lab named Godiva and a black lab named Sasha. They were her 1st fur babies, which she had for 12 1/2 years.

Her first passion is art and has been able to pursue that by teaching canvas painting classes at Brush Strokes Art studio in Tewksbury to kids and adults for the past six years.

She is a stay at home mom from Tewksbury who lives with her husband, 13-year-old daughter and a sheepadoodle named , Julius (named after treehouse beer!) She coaches volleyball with the North Andover Booster club and a Girl Scout troop leader of 13 girls for the past 7 years.

Now that she has a teenager, she was looking to fulfill her other two passions. Her love for dogs and the outdoors and BlueDog was the answer!