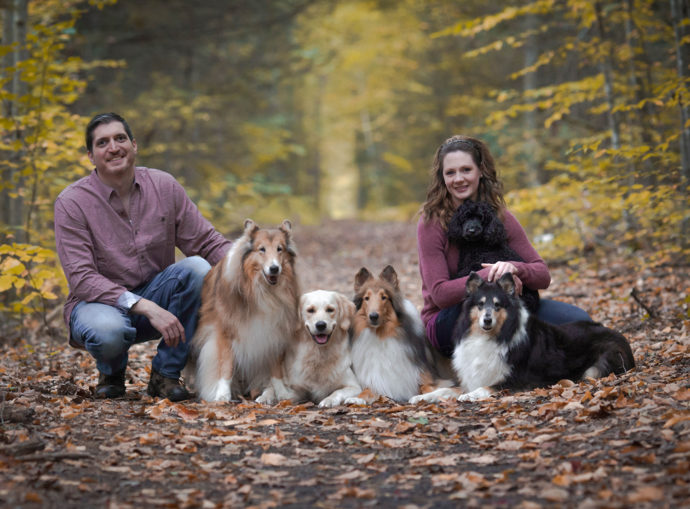 BlueDog founder Kimbery Palermo is a Certified Professional Dog Trainer, a Certified Control Unleashed Instructor, a Level 1 TAGteacher, and an AKC Canine Good Citizen & S.T.A.R. Puppy evaluator. She has a bachelor’s degree in Zoology from the University of New Hampshire with a minor in Animal Behavior and Psychology. She has also received a certificate of completion from Gail Fisher’s All Dogs Academy Instructor Training School and All Dogs Academy Dog Training School.

Kim has only ever wanted to work with animals and she grew up with a plethora of pets ranging from many dogs to chickens and goats, a horse, plenty of small animals, and even a bunch of tarantulas. Her first job as a teenager was at a pet supply store and she hasn’t left the pet industry since, holding multiple positions at pet supply stores, dog daycares, and shadowing dog trainers. As a college graduation gift, Kim received Elsa, a sable Collie who inspired her to learn even more about dog behavior and training and got her involved in competing in dog sports.

In 2008, Kim followed her dream and founded BlueDog as a solo dog walker. Not long after that, she became so busy that she began hiring employees to help her. In 2011 she pursued her lifelong passion for training dogs and opened up BlueDog’s very first training facility on Lupine Road in Andover. Since then, Kim continues to grow and improve her business, expand her knowledge endlessly, and speaks locally (and in the fall of 2021, worldwide) to educate dog owners and dog trainers alike.

Kim actively trains and competes in Rally-Obedience, Obedience, Nose Work, Agility, and Herding. She owns five dogs: three Collies named Reese, Lincoln, and Jane, a Miniature Poodle named Walt, and a Golden Retriever named Fern. During her free time she likes to escape to the woods to hike with and photograph her beloved dogs. She is also a beekeeper and raises a flock of chickens, ducks, turkeys, and guinea hens and has a clicker trained cat named Fig. 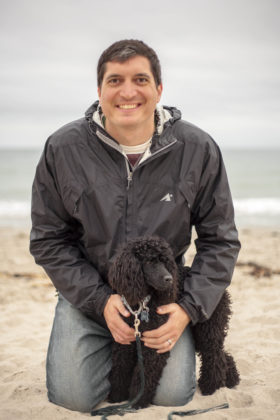 Chris grew up on a lake and always had an interest in wildlife, animals and dogs.  At the time, most of his pets were all encased in a glass salt-water reef tank, where he maintained and propagated a large number of corals and tropical saltwater fish.

His childhood household had one dog, a Chihuahua named Lily who bared a striking resemblance to the Taco Bell dog. And little did he know when he married Kim that his entire life would revolve around dogs, and lots of them!

Chris received his Bachelor’s Degree in Business Management from the University of Massachusetts, Boston and has over ten years of professional experience in sales and management in the corporate world.  From the start he has supported and helped with the early growth of BlueDog.

But as 2012 kicked off and BlueDog had grown to the point where Kim needed her business partner full-time, he took the leap and quit his job as an IT recruiting manager and joined the BlueDog management team.  He hasn’t looked back and loves the job of running the family business with Kim.

When Chris is not teaching classes or working on the business, he enjoys expanding his knowledge about dogs by attending training seminars and occasionally taking classes with his dogs.  During his free time he enjoys beekeeping, gardening and woodworking.

Why the Name “BlueDog?” 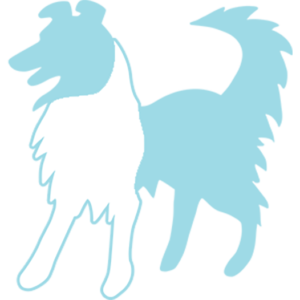 In 2008, Kim quit her full-time job to pursue her passion to work with dogs. By starting her own business to help dogs, she felt the need to name the business in honor of the dog who started it all, her very first Collie, Maggie.

When Kim was 6 years old and with a broken heart after her little pet guinea pig Popcorn had just passed away, her mom took her to a breeder where she got to pick out her very own puppy. Kim immediately fell in love with a small blue-merle Collie, whom she named Maggie.

They became fast friends and enjoyed the many adventures that only a child and her dog can experience together. The next 11 years Maggie stood by Kim’s side as she went through elementary school, middle school and high school. It was her senior year of high school that Kim experienced the complete heartbreak of losing a dog, but not without the many memories to carry with her for the rest of her life.

So with much love, Kim named her business BlueDog and designed the logo herself in honor of her blue-merle Collie, Maggie.